Flagler is Leading the Way

In the heart of Kendall, Fla., will rise one of the most highly anticipated retail lifestyle centers. Formally known as the Town & Country Center, the newly named The Palms at Town & Country will serve as Kendall’s centralized downtown thanks to the vision of Flagler Development Group. The 75-acre site, featuring 700,000 square feet of retail and a medical office complex, will bring together a unique mix of national retail, entertainment, dining and lifestyle tenants.

Bordering the property’s six-acre lake, the specialty retail center is home to Kohl’s, and will feature dozens of apparel, restaurant, entertainment, home accessories, and specialty businesses when completed.

A key component to a successful development is the ability to foresee a properties potential far into the future.  With proprietary metrics, a keen understanding of the demographics and a deep understanding of real estate, Flagler envisioned this area’s growth and eventual needs when others turned away.  “South Florida is land-locked and it made complete sense that growth would continue far west,” it says.

“Properties that may have seemed out of place without enough density or desire from the marketplace previously are now ideal locations to service growing areas.”

Regardless of the ideal location and surrounding demographics, the project took more than just building and placing an open-for-business sign.  Flagler wanted to ensure that the design was as much a destination as it was a complement to Kendall.  As such, the tenants that Flagler desired to take occupancy had to complement the area and serve the needs, both immediate and long-term.

Jim Padron, senior development manager at Flagler Development Group, credits the team behind The Palms at Town & Country on its successes.  A team of professionals was able to bring the project to fruition, including TIAA-CREF, a financial service organization that has owned the town center since 1988; Jones Lang LaSalle, the town center’s executive leasing agents; and established contractors, architects and consultants.

As a hands-on developer, Padron says Flagler prefers to align itself with a team of contractors, architects and consultants from the beginning to the end of each project.  So when the opportunity presented itself to revamp the existing mall, the group wasted little time in assembling a team to strategically create a better mix of retail, entertainment, dining and office areas for the property.

In an effort to boost consumer appeal, better utilize the properties existing lake and create a better pedestrian environment and improved traffic flow, Flagler set out on the process to revamp The Palms Town & Country center.  Built in 1984, the original mall – which featured a convenience center and an enclosed mall – could not meet the growing retail demands of its surrounding community.  Plans were in the works to upgrade the center since 2004.

When completed in the Fall of 2012, the $100 million project situated will house close to 700,000 square feet of a diverse blend of retail and lifestyle components.  In addition, the center will feature a medical office complex, valet parking, restaurants, and public spaces.

Divided into three phases, the first phase of the renovation consisted of an expansive external revamping of 292,730 square feet of existing retail space to incorporate the Mediterranean themed elements in areas such as lighting, new color scheme, redesigned walk-ways, and the parking areas.  Considered a convenience center, this phase is home to national retailers including Marshall’s, Men’s Wearhouse, Nine West Outlet, Publix, and 24-Hour Fitness.

The second phase of the project will feature 397,834 square feet of newly constructed open-air retail, entertainment, and home accessory stores, restaurants, and specialty businesses – some of which are standalone establishments incorporated into the overall theme – designed to fill the community’s much needed lifestyle niche.  Kohl’s was the first store to open in the specialty retail center and occupies 88,783 square feet of space.  Nordstrom Rack also announced it will open a 34,842-square-foot store at the center by spring 2010.

The third and final phase will incorporate additional entertainment, restaurants, and retail stores.

In addition to acquiring the appropriate retailers, Flagler needed to change the infrastructure of the site to accommodate further growth.  Two general contractors, including Flagler Construction Corp., are constructing the project.  The buildings are constructed with a combination of steel and tilt-up concrete.  Flagler Construction Corp. is responsible for all site work and the convenience center facelift and Brasfield & Gorrie will complete the vertical construction around the lake.

“We are redoing the utilities, drainage, lighting, landscaping, and the parking layout, as well as securing additional signage to maximize our exposure.”

One of the most unique features on the property is a six-acre manmade lake that is approximately 70-foot-deep, which will serve as the focal point of the retail destination.  Flagler intends to incorporate waterfront dining into the overall design.

To make way for the new construction, approximately 400,000 square feet of property was demolished, including a structure that abutted the lake.

Getting the Right Mix

Extensive research was completed to assess the market needs and understand the demographics of The Palms at Town & Country area.  Padron says a more thorough look at Miami and the surrounding region showed that the retail scene showed little diversity and left much to be desired.  Because the center is situated adjacent to the heavily travelled Florida Turnpike, Flagler saw potential to attract additional customers through the renovation and expansion if it were properly marketed and suited to the clientele’s needs.

“There are very good traffic counts off the Florida Turnpike – approximately 102,350 cars a day pass on the west side along Kendall Drive along the south side of the property,” Padron notes.

Through market research, Flagler also determined the average local resident is 37-years-old, with an average household income of $73,528 in a seven-mile radius.

The shaky economy means consumer spending is curtailed – a fact that Flagler is well aware of, but Padron says will not affect the center as harshly as in other areas. “The shopping in this area is resilient,” Padron notes. “The retail sector is somewhat down, but relative to our market, they are outperforming.”

Read the whole article below. 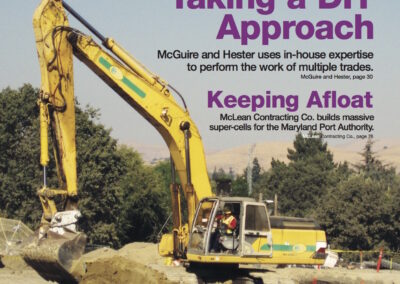 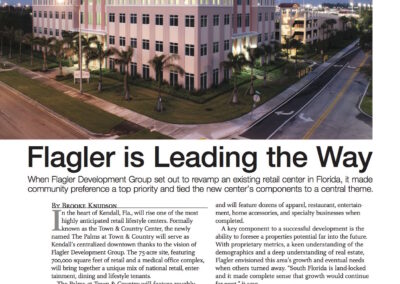 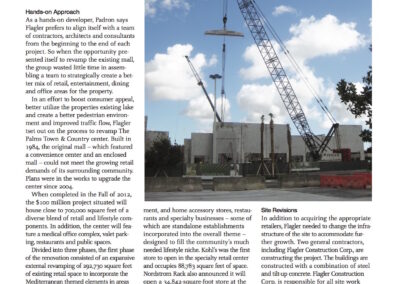